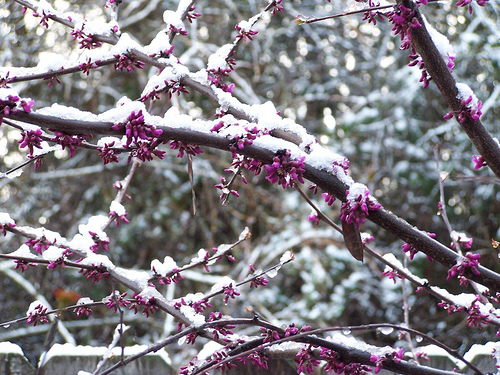 Daniel talked recently about actively “not knowing” what you are going to experience before you experience it. Don’t imagine you know what a Mormon temple looks like inside. Don’t imagine you know what a forsythia branch looks like in bloom. Go and take it in as if you’ve never seen one before.
This reminded me of a poem I have recited to myself every spring for the 20 years I’ve lived down a wooded lane. After months of snow, I’m so eager for the blossoms to emerge on the redbud tree. But what happens instead is a snowstorm, which threatens to dampen my spirits. After I remember this poem though, I go down the lane to see what surprises nature may have brought overnight. I’m glad I’ve been doing this for 20 years because, at 56 years old, I may have only thirty springs remaining to see the redbud tree in bloom.
Lovliest of Trees

Loveliest of trees, the cherry now

Is hung with bloom along the bough,

And stands about the woodland ride

Now, of my threescore years and ten,

Twenty will not come again,

And take from seventy springs a score,

It only leaves me fifty more.

And since to look at things in bloom

About the woodlands I will go

To see the cherry hung with snow.

Doing What You Want

I’ve been talking lately about choosing to change. Change can be very difficult, whether it’s a major change or even just something relatively small. But choosing to change, and acting on that decision, increases our personal power and, if we stay with “what is”, also makes us happier. What is it that we’re afraid of? Why do we protect ourselves from our own power? Why are we afraid to take paths that will empower us? If we all did what we wanted, if we were fully empowered, what would be so wrong with that?
Well, other people might be unhappy.
And sometimes this is the excuse we use: we won’t mix things up for fear, say, of upsetting our spouse. But what this really means is that we don’t want the anxiety of worrying about hurting that person.
But everything you do will work out just fine if you just do what you want to do. Be yourself. For many who were raised in a Judeo-Christian tradition, there’s an underlying belief that we think we’re somehow “bad.” We fear that if we were truly empowered, we’d be bad or do bad things.
But whatever you feel, you’re going to feel anyway. The difference is when you’re empowered, you’ll also be doing what you want. If you don’t take your power, you’ll still feel the same way, but you also won’t be doing what you want.
The difference between empowerment and non-empowerment is fear. Nothing gives you energy like not being afraid and doing what you want. When you avoid living, you cheat everyone around you too, because they don’t get the benefit of who you really are. So as long as you’re not, say, an addict, you’re not going to do harm by doing what you want.
Be in the moment, always, but choose to change your life if that is what you want. You’ll be happier, and so will the people around you.
(Adapted from a talk given by Doen Sensei, November 2007)

Tokusan and his development as told through the stories and koans of Buddhism. This series on Tokusan began with three video clips from a previous class. (Part 1, Parts 2 & 3)

Zen in the Virtual Age

Mary Jaksch, Roshi, has kindly offered us this post. I know Lost Coin is very receptive to her point of view, in fact we share it. I am grateful she has chosen to post on our site.
– Daniel Doen Silberberg

A guest post by Mary Jaksch, Roshi
Zen has had to adapt over the millennia. After all, medieval culture in Japan had little in common with ancient China, and modern times have very little in common with either. Yet Zen has survived to this day. Why? Well, I think it’s because Zen is about life. Actually, it is life!
But sheer survival isn’t enough. If Zen is to flourish in the West, it needs to truly embed itself into our culture. And for that to happen, it needs to embrace the the virtual dimension that has become a real part of life for many people.
The Net with its particular communication forms, such as blogging and social media, has become a major force to be. That’s something I’ve learned in the last year or so through blogging.

The art of Zen blogging

Eighteen months ago, my son Sebastian said to me,

As you can see, I was still an innocent Zen teacher at the time!
Blogging turned out to be a great adventures and a steep learning curve. Soon I was posting a weekly article on my blog. I told my colleagues in the Diamond Sangha about it.
By return of post I got the following email from one of my more conservative colleagues:

“What I read in your blog shocked and horrified me. It has nothing to do with Zen and leads people astray!”

Ouch!
I have a rather impish sense of humor, so I immediately made his comment the focus of my next blog post Zen and the Art of Blogging.
END_OF_DOCUMENT_TOKEN_TO_BE_REPLACED